Last week, iPhone case manufacturer exposed a suspected 4-inch iPhone SE specification, and now based on these leaked infos the concept designers create variety of iPhone SE renders. OnLeaks and 9to5Mac designed a set of iPhone SE renders on the basis of the iPhone 5, but the final effect is slightly different.

The iPhone SE designed by 9to5Mac looks basically same with iPhone 5s, but the OnLeaks version designed with rounded edge, which looks like a little mix of iPhone 6 and iPhone 5s. Compare new renders provided by Martin Hajek and Curved Labs, you will find the difference between them is very clear, the latter is equivalent to a small version of iPhone 6, that is a simple concept design, without any real basis.

The previous news that the size of the iPhone SE will be same with the iPhone 5s. But some source said that this new device will use a curved screen, but the concept is difficult to present this little feature. Although the size of iPhone SE may same with iPhone 5s, but because of the rounded corners, its protective case may not be suitable for use on iPhone 5s, because the two shapes are not same. Also suggests that the camera could protrude somewhat, a possibility if the iPhone SE adopts the 12-megapixel camera in the iPhone 6s, which is approximately 0.7mm from the 7.1mm body of the device. The iPhone 5s’s thickness is 7.6mm, and for the iPhone SE, rumored to have the same dimensions, so the camera could stick out slightly.

Although the iPhone SE is said to resemble the iPhone 5s on the exterior part, whereas the internals are rumored to be on par with Apple’s latest iPhone 6/6s devices. It will include an A9 processor, along with the oft-mentioned upgraded camera setup and an NFC chip to support Apple Pay and no 3D Touch display.

Apple is expected to introduce the iPhone SE at an event that’s now rumored to take place on March 21. Also debuting at the event is the next-generation 9.7-inch iPad, which may be branded as a smaller “iPad Pro,” and new Apple Watch bands. 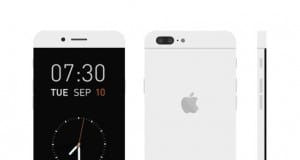 -
0
Reportedly Apple plans to use a flexible OLED display on the future iPhone, but certainly not iPhone 7, maybe iPhone 8, 9, 10. A...