Just three days, iOS 9 adoption has reached 20%, which is a very large number and recording in the smart phone area. The appealing new features and improvements forcing people scrambling to upgrade the new system, However, each generation of iOS upgrade is never so smooth for few people, because there always emerge this or that issues when they attempting to upgrade their device.

In addition to the “Software Update Failed” and “Update Requested” issues we mentioned few days ago, a new problem appears.

Some users have reported that they got stuck at the “Slide to Upgrade screen” while updating their iOS device to iOS 9. Apple Support Communities member madisonkandrotas was one of the first users to report the issue:

The good news is that Apple has acknowledged this bug and has provided a quick fix. So, when the Slide to Upgrade screen does not respond, here is what you should do:

How to Bypass  Slide to Upgrade Screen

That is, the fix should be worked if you follow the above tips, hopefully, resolve the problem and allow you to seamlessly perform an upgrade. 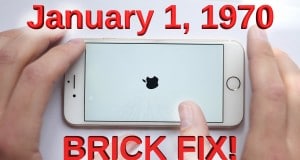 How to Fix iPhone and iPad Bricked by the ‘1 January,...