Have you encountered such a Mac Error Code -36 when trying to transfer files to a flash drive or memory card? If so, following our simple tutorial posted below to fix this error.

“error code -36” completely halts the copy or move process in the OS X Finder. The full error is usually read as “The Finder can’t complete the operation because some data in “FileName” can’t be read or written. (Error code -36)”. The filename is sometimes .DS_Store, but it can happen with just about any file.

The problem stems from the “dot-underscore” companion files that Mac OS X’s HFS+ filesystem creates for files when they get moved to FAT16 or FAT32 volumes. These hidden files – which start with “._” followed by the original filename – contain extra information to go along with the main file’s data. The problem is observed when folders from a Windows-compatible volume get moved to a Mac and then back again. The dreaded “Error Code -36″ message is the result.

Thanks to a handy command line tool called “dot_clean”, you can simple fix Error Code -36 on a Mac.

If the problem is recurrent, you can also try to delete all .DS_Store files on a Mac using the command line, which can work as a temporary workaround if for some reason dot_clean fails. That was actually what I had done in the past to get around this and other similar input/output error messages before discovering this specific command approach.

If this worked for you, or you know of another trick to fix Error Code -36 in the OS X Finder, let us know in the comments. 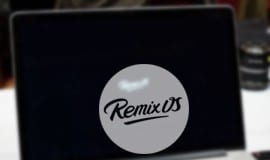 -
0
Remix OS is an Android-based operating system developed by Jide Technology, this is a software platform built by three former Google employees. Recently the...