So far we have seen various rumors and concepts about the iPhone 5se, which is said to be a successor to the iPhone 5c. The device is considered to be with the smaller 4-inch screen, and have a design that will look like a hybrid of iPhone 5s and iPhone 6s. This means it will have a chamfered design and but will maintain iPhone 5s’ straight edges.

The below is a new iPhone 5se concept by Arther Reis just based on the above rumors, with a more rounded edge design.

In addition to that it will bring some notable upgrades and features including the A9 chip found on the iPhone 6s, Live Photos feature, faster Touch ID sensor, an updated iSight camera and more.

Apple’s iPhone 5se and iPad Air 3 will get a release date very soon after the company’s March 18 event. 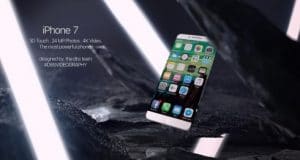 -
0
Recently, a new iPhone 7 concept released by ​​DBS team with an edge-to-edge display and almost frantic edge display. The hardware configuration of this...