Home iPhone Why 3D Touch Not Working on iPhone SE

When Apple launched the iPhone 6s / Plus, 3D Touch was one of the headline features. Apple devoted a full four-minute video to showing what it does and how it works. Obviously this feature is enough to widen the gap between the iPhone 6’s and 6s, but over the past year, the sales of iPhone 6s is not satisfactory. So Apple is more willing to use the ready-made production lines and technology, to fill the small sized phone market to obtain greater benefits.

Then why Apple abandoned the 3D Touch on iPhone SE? One of the biggest reasons is certainly price, in addition to the components and manufacturing costs, 3D Touch hardware is specifically designed for 4.7-inch and 5.5-inch iPhone. If using 3D Touch on iPhone SE, Apple needs to re-design a complete solution, course impossible.

Analyst Kuo Ming-pool in December last year, said that Apple impossible to use 3D Touch on the new 9.7-inch iPad Pro, this is not only due to technical difficulties, additional 3D Touch yield also not high. So to ensure the supply of iPhone 6s not go wrong, Apple will not necessarily apply 3D Touch to iPhone SE and iPad Pro in the short term.

However, this is not just a single issue of the supply chain, iPhone SE followed the complete design of iPhone 5s, if forcing to put the pressure sensor into the its already cramped space, that will greatly increase the thickness, or forcing Apple to redesign the entire layout, the cost is too high.

Finally, iPhone SE itself for one-handed operation, so no need to design those features or hardwares to improve operating experience, such as Reachability,3D Touch also not necessary.

So give up 3D Touch on iPhone SE is the most economic and scientific choice. 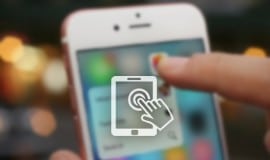 -
0
March is coming, means the long-awaited Apple's spring event will provide us with the rumored smaller 4-inch iPhone, whether iPhone 5se or iPhone SE,...