As the film is scheduled for a June 24, 2016 release, so currently no HD wallpapers for ‘Independence Day: Resurgence’ If you are looking forward to the film and want to download some related pictures for your desktop background, then the below are 14 most clear wallpapers we cropped via the film trailer. 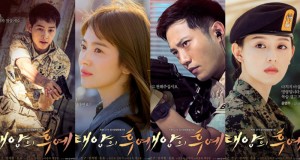 Descendants of the Sun Wallpapers for iPhone

-
0
"Descendants of the Sun" is a popular Korean TV drama nowadays by the Korean KBS television broadcast on February 24, 2016. Which takes place in...