We know that, in accordance with the requirements of the Developer Agreement Apple rejected all apps using 3D Touch to measure object’s weight. But Apple can not prevent a jailbreak tweak to achieve it.

Grams is a new jailbreak has the ability to measure the weight of an object using 3D Touch. It is now available in Cydia’s BigBoss repository for $0.99. If you are interested in this gadget, just search and install Grams on your jailbroken devcie. After installation, the tweak will add a weighing area in the Control Center, this means you can now measure the weight of light objects by using the 3D Touch display right from Control Center on your iPhone 6s or iPhone 6s Plus.

How to Measure an Object’s Weight Using Grams

Since the difference of the two weights is 5.00 grams, that means the weight of the packet of sugar is 5 grams.

As noted by Phillip Tennen, one of the lead developers behind Grams, the 3D Touch display is capable of registering weights of up to 385 grams, which is about the weight of 385 plain steel paperclips. That’s just under 0.85 pounds, so it’s not really heavy enough that it would cause damage to your display either. 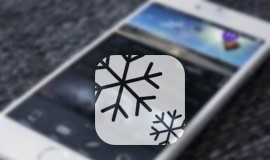 -
0
You must certainly no stranger to Winterboard, which is the most popular theme tweak for iOS, while iOS 9 jailbreak released a few weeks,...