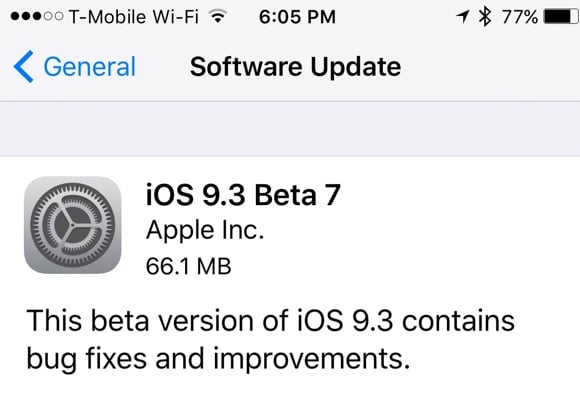 While the beta 7 does not bring any significant changes to the upcoming iOS release it features under the hood improvements for new features that are introduced in iOS 9.3. The major features include Night Shift to help with sleep issues and multi-user login for education accounts. Touch ID protection for Notes app, new 3D Touch actions, new features for CarPlay and more.

Features found to be included in iOS 9.3 are:

Apple Watch: Using iOS 9.3 and watchOS 2.2, Apple now allows an iPhone to pair with more than one Apple Watch. Both devices require the latest beta updates. with Watches running watchOS 2.2 and an iPhone running iOS 9.3.

Night Shift: Reduces blue light at night, much like f.lux does on a Mac. In beta two, a toggle button for iOS 9.3’s new Night Shift feature was added in the Control Center on the iPad and iPhone. A later beta included a tweaked Night Shift toggle switch in Control Center, removing the confusing pop-up message from the icon.

Health: A new interface makes it easier to see move, exercise, and stand data. A new menu in certain categories helps users to discover apps that can be used to track health data.

CarPlay: CarPlay includes “New” and “For You” sections in Apple Music, and a “Nearby” feature in Maps helps users discover the best local restaurants, coffee shops, and more.

Education: Shared iPads for students, a new Classroom app, and an AppleSchool Manager.

Verizon Wi-Fi Calling: Added in the third beta of iOS 9.3.

This will likely be the final beta of iOS 9.3, which will likely see a spring release alongside OS X 10.11.4, tvOS 9.2, and watchOS 2.2, sometime following the March 21 Apple media event.

The update is available in both Apple’s dev center and public testing portal, as well as via an over-the-air update for folks running the previous beta.

If you are not a registered developer, then you will find direct download links and OTA profiles for iOS 9.3 beta 7 (13E5233a / 13E5234a) below.
Before you begin, we recommend that you make a backup of your iDevice (iTunes and / or iCloud).

Once the backup is done, simply click the link below:

iOS_9_Beta_Software_ProfilePublic.mobileconfig
You must install the profile on your iOS device, and once this is done, your iPhone and iPad will probably ask you to restart.
Following the installation / restart to take advantage of the update, simply go to “Settings” -> “General” -> “Software update” and follow the instructions (as any bet up to date ;)) 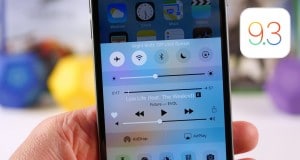