Home iPhone An Incredible iPhone 7 Concept You May Never Seen

One would expect Apple to bring an updated design and a few new features to the next generation of iPhone, edge-to-edge display, a thinner body and improved Home button. We have seen many iPhone 7 concepts in recent, but most of them with a similar design. Today, a new concept designed by Herman Haidin seems to be out of this world. Apple may not introduce such a revolutionary iPhone for at least a couple of years.

To begin with, Haidin imagines the iPhone 7 without any physical buttons or ports except the reset button. Everything has gone wireless.

The new design features a full 5-inch display that covers the entire front panel, paving the way for immersive gaming and videos. The back panel also packs a secondary display, though it’s limited to widgets and a personalized background image. The entire device appears to be semi-transparent thanks to a new liquid metal design, and it’s just 3mm thick, Apple is planning to ditch the 3.5mm headphone jack to make the next iPhone slimmer, but it would come nowhere close to 3mm. Moreover wireless charging, and a new stereo audio system. It’s all held together by liquid metal.

The cameras have been improved in this concept as well. Specifically, the rear camera features a 16 nano pixel lens with automatic image optimization based on time of day, location and weather. It also doubles as a retina scanner.

There’s also an iCloud-based sync for saving your apps and personal data online to free up space on your phone, all your personal data and files are stored in the iCloud, which you can access using your Apple ID. Of course, the concept looks far-fetched, but it does not deviate from Apple’s design language. 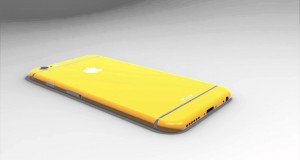 A New iPhone 5se Concept Based on the Rumors So Far

-
0
So far we have seen various rumors and concepts about the iPhone 5se, which is said to be a successor to the iPhone 5c....