Leonardo dicaprio, a legendary movie actor just win for his starring turn in “The Revenant” at the 88th Academy Awards — his first Oscar. This is undoubtedly a strong affirmation for his personal acting career. Countless film fans are happy for him, because several classic films he played became the memory of a generation, especially the Titanic.

If you like him as I do, then should not miss the following classic instants about DiCaprio, and set them as your iPhone wallpaper.

Step 1: Fire up Safari Mobile on your iPhone and iPad, and navigate to this page, then find a wallpaper you like from the Gallery we posted above, tap it.

Step 2: Tap and hold on the image. You should see a menu offering at least two options: Save Image and Copy. If you see Open in New Tab, choose that and switch to that tab – chances are you’ll see a higher-resolution version, which will look better if your iPad has a Retina screen. 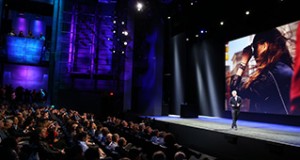 Download ‘Let us loop you in’ Event Wallpapers for iPhone, iPad...

-
0
The March 21 'Let us look you in' event Apple just announced perhaps to bring us a lot of surprises, the new iPhone SE...