Home Knowledge Tips How to Fix iPhone 6s and iPhone 6s Plus Battery Percentage Getting...

The battery issues exist in the iPhone 6s and iPhone 6s Plus has been criticized by people, recently some users complained a serious battery problem on the Apple Support forum that their iPhone 6s or iPhone 6s Plus’ battery percentage doesn’t update, getting stuck on a fixed value.

jonbon described the problem in the Apple Support Communities

My iPhone 6s Plus battery percentage gets stuck frequently. Like for example, it will say 87% all day, and then I’ll plug it in for an hour, and it will still say 87%.

The only fix I’ve found is to power the phone off and then turn it back on. Then the percentage will update correctly, and will usually continue to update properly for awhile. But eventually it gets stuck again.

In the 3 days since it was delivered on Friday, I’ve had to reboot my iPhone 6s Plus at least four times to fix this issue.

For this, Apple published a new support document where it has acknowledged the issue.

Apple has said that it is aware of the issue and is investigating the cause so it can provide a fix. The issue seems to be affecting users who set the time on their iPhone 6s or iPhone 6s Plus manually or change time zones while traveling.

How to Fix The Battery Percentage Getting Stuck:

Apple is recommending users to restart their iPhone, and go to Settings > General > Date & Time and make sure that Set Automatically is turned on. 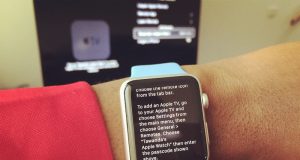 -
0
Apple devices can always communicate with each other, Apple TV as a non-mobile device, the remote control is crucial. But in some cases, you may...