Apple released a new version of iOS 9.1 beta for developers testing at this Monday. Last week, the company seeded iOS 9.1 beta 4 to developers with several improvements and fixes, such as new wallpapers of Jupiter, Mars, Neptune, and a desert landscape, along with some small changes to the shift and delete key. The beta 5 update also contains further improvements.

The new build arrives as 13B137 and is compatible with any iPhone, iPad, or iPod touch that runs iOS 9.

As we all know, iOS 9.1’s most notable new feature is the new emoji characters added to the keyboard that include images for burrito, avocado, unicorn, taco, and a new mystery eye emoji. Apple also added support for the new Apple TV and iPad Pro , both of which are due out later this fall.

Anyone who currently has the fourth beta of iOS 9.1 installed on one of their devices can access this latest seed via an over-the-air update through Apple’s on-device Software Update mechanism (Settings >> General >> Software Update).

The download itself should weigh in at approximately 1.4GB for those installing for the first time from the Apple developer portal.

Here is a simple tutorial we have posted guides you how to install iOS 9.1 beta 5 on iPhone, iPad or iPod touch for free. 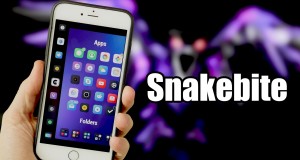 -
0
In the jailbreak community, there are many cydia tweaks specifically created for the 3D Touch on iPhone 6s and iPhone 6s Plus, but only...