Home Knowledge Tips How to Use 3D Touch on iPhone 6s

Apple’s new product launches really wonderful, new iPad Pro, Apple TV 4 and iPhone 6s / plus, where a new feature worth noting is the 3D Touch, which brought about a qualitative leap to the iPhone experience. Apple spent about ten minutes introducing 3D Touch on the event. This new technology used on the iPhone screen is an enhanced version of the Force Touch.

Apple introduced in detail how it works in the keynote

When people press the iPhone 6s screen, 96 sensors embedded in the backlight of the retina display measure microscopic changes in the distance between themselves and the glass. Those measurements then get combined with signals from the touch sensor to make the motion of your finger sync with the image on screen.

To make what is counterintuitive feel normal, each on-screen “peek” and “pop” is accompanied by a 10-millisecond or 15-millisecond haptic tap, little vibrations that say “good job” to your fingers when an action is complete.

Apple is feeling confident enough that it’s integrated 3D Touch into everything on the iPhone 6S and 6S Plus—the phone, the weather app, iTunes, messaging, and the Web. Facebook and Instagram plan on incorporating it into their iOS apps shortly after the phones arrive in stores on Sept. 25.

On the iPhone, Force Touch is used to trigger shortcuts. For instance, you can deep press on a a destination in Apple Maps to launch turn-by-turn directions and skip a few steps.

In the Music app, if you want to add a song to your queue or save it to a playlist, you can use Force Touch instead of the tiny three-dot button. Apple will also let you preview a website with a deep press on a link in Safari or your address book. In some cases, shortcuts will surround your finger — this gesture is quite reminiscent of the very innovative shortcut menu in Path 2.0.

How to Use 3D Touch

Force Touch on the iPhone 6s triggers Taptic Engine as well. Like on the Watch, your phone slightly vibrates when you deep press, letting you know that you triggered Force Touch.

There are some operating system gestures as well. You can deep press from the side to switch between apps without having to double press the home button. 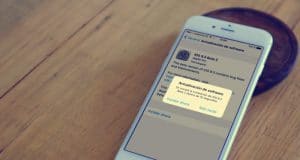 -
0
Currently iOS 9.3.1 is the only public firmware can be restored using iTunes. Meanwhile, Apple is testing the fourth beta of iOS 9.3.2 and will release...