If you have some old devices can not install iOS 9 system, then surely you have been looking forward that Apple will bring a new update for them, but the fact is cruel, they really outdated, but do not lose heart, there is an awesome software called “Grayd00r” has the ability brings the iOS 9 interface on the third-generation iPod touch and first generation iPad, while also enhance the performance of these two devices.

Grayd00r installation is not complicated, just need some time. Furthermore appearance may not be 100% similarity with iOS 9, but is acceptable, more importantly, it comes with some new features. These new features include a SlideOver application switcher (iPad), a control center, OTA software update, Cydia, as well as a “App Time Machine” , which allows users to find and install an older version of iOS applications , leading to a smoother experience for the old device.

Grayd00r adjust the speed and performance of the system by default, so it is more fluid than the native iOS, according to its official website: “Many system services have been disabled, to enhance performance.”

Grayd00r installation is very simple, we first need to restore the device, and run Grayd00r software (the official website to download) on a Mac or PC, then install it according to instructions step by step. 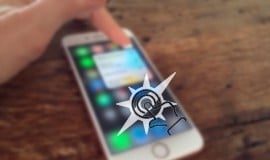 8 Tips of 3D Touch You Should Know When Using Safari