This means now the Apple TV user can download Sonic The Hedgehog form tvOS App Store, those of you who’ve already purchased Sonic the Hedgehog on iOS will therefore be able to enjoy the game on the 4th generation Apple TV free of charge. Everyone else will need to pony up $2.99 for the privilege of playing the classic game, but your money goes a long way, as it’s playable on the iPad, iPhone, iPod touch, and Apple TV.

Currently, users can play ‘Sonic the Hedgehog 2’ and ‘Sonic CD’ on Apple TV. The jump from Sega Genesis to Sega CD was a costly one in the mid-90s, but with today’s mobile technology, you don’t even need a different device to play this highly-evolved Sonic game. Sonic CD is a briskly-paced action game where you can time-travel between different eras and alter the future by destroying robot generators. Sonic CD also has impressively precise movement controls, and a series of huge boss battles that can be a bit intimidating. All this, plus a wild animated intro, make Sonic CD a clear Must Have.

Apple TV still has a lot of places that can be tapped compared to those professional home console Sony PS4, Microsoft Xbox One, but at least for now, Apple TV is a more affordable alternative. Cook has been proposed, App is the future of television, but that does not mean we’re going to throw away set-top boxes. Apple TV is a revolution, it represents “the future of television.”

If you are no longer young, and if you want to experience the glory of Sonic the Hedgehog of want to relive own youth, then you may immediately go to Apple TV App Store to find the game.

The below is a hands on video that playing Sonic the Hedgehog on Apple. 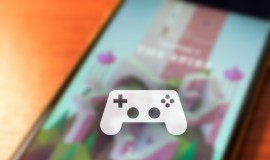 -
0
You surely must know Monument Valley if you often visit App Store, which is great puzzle game with beautiful graphics and ingenious levels. The...