Asphalt developed by well-known game developer Gameloft, which has been highly acclaimed by racing game enthusiasts since its initial release. The company has been continuously update the game to enhance gameplay,

New ReplayKit Support allows players to share their game video to the player community, course this feature only exclusive to iOS 9 users. 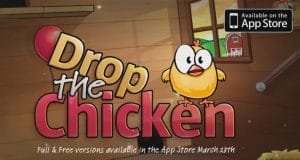 0
Drop The Chicken is an exquisite cartoon, classic, puzzle game, there are a lot of bodies and props support physical impacting, and a lot...