Home News Apple has 433 Carrier Partners Around the World

In addition to the online Apple Store and Apple Retail Store, the carriers also is an important distribution channel for Apple selling iPhone.

Currently, Apple’s carrier partners has reached 433 in worldwide. iPhone is currently sold in 169 countries and territories, according to the World Bank said that Apple’s partners covering about 93 percent of global mobile operators.

Um expects currently the permeability of iPhone (market share) in the global market is only 7.7%, which is still more room for growth. So far Apple has sold 821 million iPhone, in which 500 million are active users.

In addition to developing the African market, Apple also carried out promotional activities in the Indian market, which will help Apple to achieve the best ever sales performance in a single quarter. Um believes in Africa and India, although the overall performance will not be significantly improved, but it reflects Apple’s strategy is that increasing sales without affecting profit. 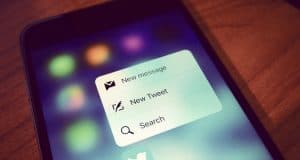 -
0
Recently, Twitter client for iOS has finally ushered in an update with support for 3D Touch Peek and Pop gestures. Which means now you...